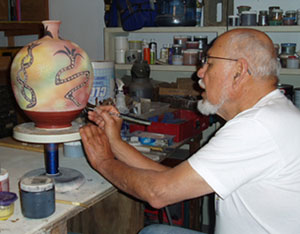 His work appeared in numerous shows and is included in the Marer Collection of Contemporary Ceramics at Scripps College, the Diane and Igal Silber Collection, The American Museum of Ceramic Art collection, the Sam Maloof collection, and other private collections.

Mr. Gonzalez taught ceramics at California State University at Los Angeles, the University of Southern California, and Pitzer College. He was Professor Emeritus of Ceramics at Chaffey College, where he taught for 33 years before retiring in 2004. After retiring, he continued to work in his studio in Claremont, experimenting with ceramic glazes, patterns, and forms.